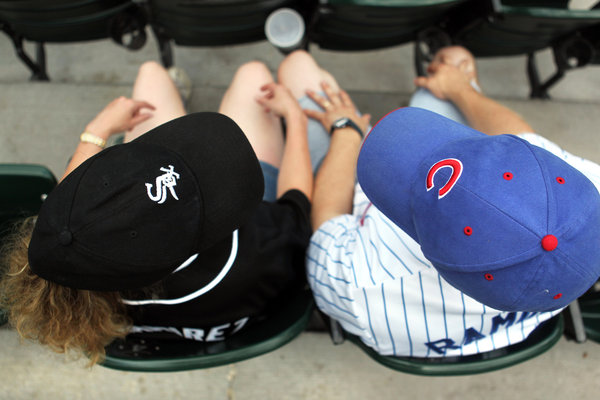 From the Saturday, May 21, editions of The Daily Journal (Kankakee, Ill.) and The Times (Ottawa, Ill.) …

It’s happened only once. And that was 110 years ago.

But I’m still not quite ready for it to happen again.

Back in 1906, the Chicago Cubs won 116 games to punch their dance card for the World Series, where their date for the ball turned out to be the crosstown White Sox, who used a late-season 19-game winning streak to stage a Cinderella run from sixth place to the top of the American League.

As you might expect, the town lost its hardball-loving mind with the Chicago Tribune reporting after the Sox clinched their World Series berth:

“Last night, Chicago was baseball mad. Men stood and cheered in elevated trains when the news was passed along that the Sox were safe and that Chicago had two pennants — and the world’s championship.”

With fan rivalry reaching unprecedented levels, tempers flared in bars across the city, and fights broke out. On Oct. 9, the opening day of the series, business came to a halt and City Hall closed down, giving even corruption a holiday in the Windy City.

In the end, the White Sox who emerged victorious in the World Series as the “Hitless Wonders” — nicknamed as such due to their .230 team batting average — pulled off one of the biggest upsets in sports history by toppling the powerhouse Cubs of “Tinker to Evers to Chance” fame in just six games.

After the clincher at Comiskey Park, Sox fans poured into the streets where they lit bonfires for a party that lasted until dawn while Cubs fans stayed indoors and mourned. Embittered manager Frank Chance said, “There is one thing I will never believe, and that is the Sox are better than the Cubs.”

We’ve never gotten a second chance to find out — not in October, at least — as 1906 was both the first and last time that the Cubs and Sox have clashed in the Fall Classic. But with both teams currently in first place into the fourth week of May, an increasing number of Chicagoans already are eyeing October on both sides of town.

In a piece entitled, “Dreaming of a Cubs-White Sox World Series? You should be,” Sun-Times columnist Rick Morrissey recently wrote:

“There’s no ‘too early’ when it comes to talking about a Cubs-White Sox World Series. There’s only ‘too late,’ usually after the first week of the season. But so many good things have happened to this point that it’s impossible not to consider a crosstown World Series. And why deprive ourselves? Chris Sale facing Kris Bryant? Jake Arrieta staring down Jose Abreu? Fans riding the CTA north, south and back again? It would be an el of a thing.”

“Not only do Chicago baseball fans deserve a Cubs-White Sox subway World Series, but they need to demand one. Here are two of Major League Baseball’s oldest, legacy teams and in their entire history, they’ve only met once in a World Series once. Just once! Inexcusable.”

Perhaps. But excuse me if I’m not rooting for a Cubs-Sox World Series this season. Now, mind you, I’d love to see one — but just not now.

It would be fun to see Cubs and Sox duke it out in the World Series … eventually.

Why? Well, as you might have heard, the Cubs haven’t won a World Series in a while. And if ever they’re to do so — this season, or some day — the team will have to overcome enormous pressure.

I’d rather not add the drama of playing the Sox on top of that. Nor do I wish to see Cubs fans suffer the humiliation of being denied a championship by the Sox, or Sox fans suffer the indignation of handing the Cubs their first crown in 108 years.

I don’t think either would be great for Chicago. But what would be is a Cubs-White Sox clash after both franchises have a recent title under their belt.

So, what do you say we schedule something for October 2017? You know, once the Cubs have already won theirs.