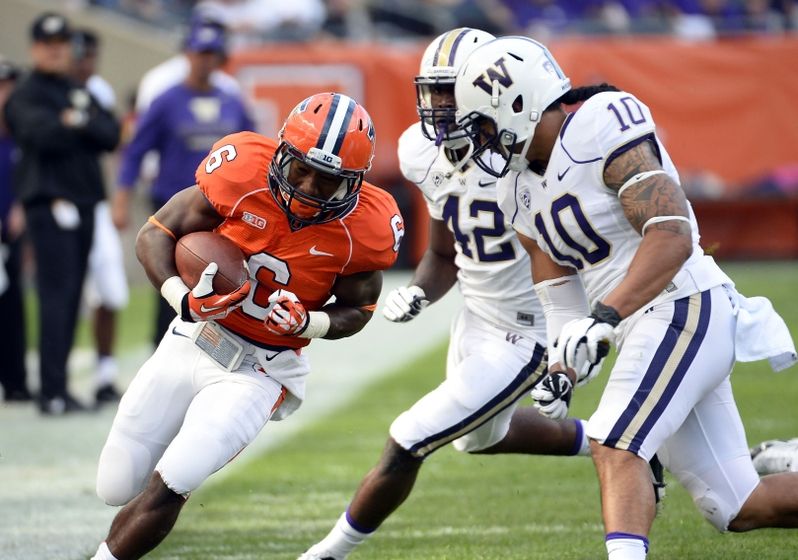 From the Saturday, Sept. 13, editions of The Daily Journal (Kankakee, Ill.) and The Times (Ottawa, Ill.) …

It’s 2,099 miles from Memorial Stadium in Champaign to Husky Stadium in Seattle, but for the Illinois football program that plays there this afternoon, the destination might as well be the moon.

And not just because of its proximity to the Space Needle.
After all, a rocket ship is only slightly more of a longshot than what Illini football has been on the West Coast over the past quarter century.

In fact, the last time that Illinois won a true road game against a Pac-12 foe was way back during the season opener in 1989 when the Illini, led by coach John Mackovic and quarterback Jeff George, upended fifth-ranked USC 14-13 at The Coliseum in Los Angeles.

Since then, Illinois has gone 0-8 in regular-season games held in Pac-12 venues. The Illini did beat UCLA out on the Left Coast in 2011, but that came during the Kraft Fight Hunger Bowl in San Francisco.

At 3 p.m., however, they get another shot when facing 2-0 Washington. I’ll be in attendance, and as for how the game will turn out, I don’t know. But here’s what I do.

In Week 1, Washington eked out a 17-16 win over a Hawaii team that went 1-11 last season. But the Huskies were without starting quarterback Cyler Miles, who was suspended for the season opener.

In Week 2, UW had Miles back, but appeared to have suspended its defense. At least that’s the way it looked when diminutive Eastern Washington quarterback Vernon Adams Jr. – who some think has NFL potential – torched the Husky defense for 475 yards on 31-of-46 passing and a whopping seven touchdowns, the most ever yielded by Washington.

Today, the Huskies are without standout cornerback Marcus Peters – the only veteran in their secondary – after he was suspended following a sideline tantrum last week.

Considering that UW’s passing defense is currently ranked 117th nationally, he may have had valid reason for the fit.

Lunt has to start fast

On Monday, Illini quarterback Wes Lunt was
named co-Big Ten Offensive Player of the Week after completing 35 of 50 passes for a career-best 456 yards, three touchdowns and one interception during Illinois’ 42-34 win over Western Kentucky.

Through the first two games of his Illini career, the redshirt sophomore has thrown for 741 yards, seven touchdowns, one interception. But 309 of those yards and four TDs have come during the fourth quarter of the Illini’s two come-from-behind wins.

That may show that Lunt is a very strong finisher – perhaps the Illini’s best since Kurt Kittner – but he’s going to need to finally be a strong starter too if Illinois is to have a shot at actually pulling off an upset in Seattle.

A win could hit home

As big as an Illinois road victory today would be for the team’s record and postseason hopes, it could be even bigger for its home attendance.

Earlier this week, Champaign News-Gazette columnist Loren Tate reported that although Illinois announced a crowd of 36,234 for its season opener against Youngstown State, fewer than 21,000 people actually passed through the Memorial Stadium turnstiles for that game.

Last Saturday against Western Kentucky, things weren’t much better. Illinois announced a crowd of 38,561 – a number that included media, stadium employees and scores of high school musicians invited for Band Day – although Tate wrote it may be generous to estimate that 25,000 were truly in attendance.

Since reaching a 19-year high of 61,707 fans per game in 2008, the season after Illinois reached the Rose Bowl, home attendance in Champaign has dropped for five straight years. Six is looking likely.

Unless, perhaps, the Illini can deep-six Washington.