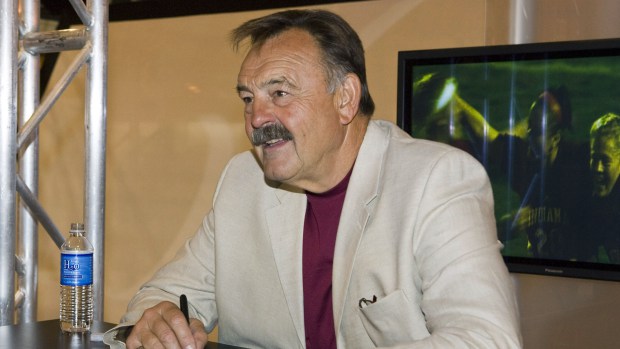 (CBS) With only three winning seasons out of its last 12, the current reputation of University of Illinois football doesn’t have much going for it. But the enduring reputation of the Illini’s football past? Well, that’s golden.

Although, right now, only part of it is bronzed.

And it’s time for that to change.

Last month at Illiniboard.com, popular Illini blogger Robert Rosenthal wrote: “There are two. Two sides to Memorial Stadium. We call them East and West. Your seats are in the West Main or maybe they’re in the East Balcony. A few years ago, the west side became the (Red) Grange side. A statue, outside the walls, dead center on the 50, memorializing the greatest college football player of all time. That’s the Grange side.

“It’s time for a Butkus side.”

He’s right — it is. But while there are two sides to Memorial Stadium, Illinois actually boasts three football immortals, and all of them – George Halas included – deserve their statuesque due.

This coming Sunday, prior to its season opener against SMU, Baylor will celebrate the grand opening of its new 45,000-seat McLane Stadium by unveiling a statue celebrating quarterback Robert Griffin III. It was only three years ago that Griffin – now with the Washington Redskins – won the 2011 Heisman Trophy for the Bears, and already the guy has a statue in Waco. I’d say that’s a premature honor.

Conversely, Illinois’ own pigskin honors are running behind, considering that it’s been 50 years since Dick Butkus played his last down in Champaign and 95 years since Halas won Rose Bowl MVP for the Illini.