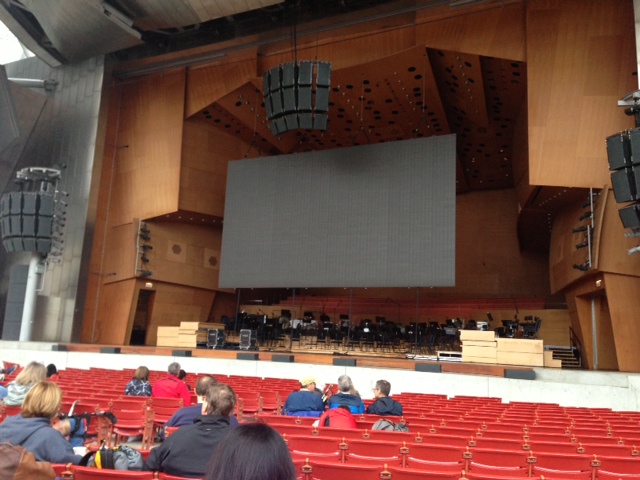 From the Saturday, July 6, editions of The Daily Journal (Kankakee, Ill.) and The Times (Ottawa, Ill.) …

In Chicago, “The Screen” is impressive.

But it also has a glitch.

Or, at least, it certainly did this week when Millennium Park’s enormous new $550,000 LED outdoor display – called “The Screen” because of its proximity to “The Bean” – didn’t seem to be worth a dime.

For 16 minutes on Tuesday night, the latest installment of the park’s inaugural Summer Film Series was delayed due to technical difficulties that left half of the 40-by-22.5 foot Millennium Park Screen at Pritzker Pavilion dark. Finally, after the system was rebooted multiple times, the full screen lit up with the crisp black-and-white glory of James Cagney’s 1942 classic “Yankee Doodle Dandy,” and all was well.

But it wasn’t a feather in anyone’s hat to see a state-of-the-art device that’s less than a month old not immediately function as it should.

Perhaps it just didn’t like the weather. After all, it was so unseasonably chilly for July 2 that many among the sparse crowd in attendance were clad in stocking caps, heavy coats and scarves.

The only thing missing was hot chocolate.

“The Screen” itself is intended to heat up the urban wonderland that is Millennium Park with Donna LaPietra, chair of the not-for-profit Millennium Park Incorporated, saying last month during its unveiling that, “We hope that, ultimately, The Screen will be able to stand big shoulder to big shoulder with all of our other iconic features here in the park, the Bean and the (Crown) Fountain and the (Lurie) Garden.”

It’s questionable whether what’s essentially a giant HDTV can become truly “iconic,” but there’s no doubt that “The Screen” – when it’s working – is pretty awesome. Capable of being suspended from either the front or the back of the stage, the LED device is bright enough to be viewed in full daylight from all 4,000 seats in the Pritzker Pavilion concert venue and even from the back of the Great Lawn, a football field away.

LaPietra called the attraction “one of the first, and only permanent, large-format LED outdoor screen systems of its kind in the world.” Thankfully, considering its malfunction on Tuesday, the half-million price tag and the expense of running it comes from the not-for-profit, not taxpayer funds, according to officials.

According to the Chicago Tribune, park officials have talked about getting permanent video capability since Millennium Park opened in 2004, but LaPietra said projection systems, the best available at the time, would only work well in true darkness and that they gobbled energy.

However, a demonstration last June when the Hong Kong-based manufacturer Lighthouse Technologies loaned Millennium Park a smaller, 30-by-16 foot screen for a showing of a ballet performance from Paris convinced officials that it was the right time to buy.

As I saw on Tuesday, “The Screen” did display a truly great picture even well before sundown – so great that the image and sound quality remained excellent even when I walked to the far back of the Great Lawn.

City officials say they hope the screen will eventually be used more than 50 times a year for events that might include live simulcasts of sports, classical music or live theater. As it currently stands, the free Summer Film Series runs each Tuesday through Aug. 20, with showings at 7:30 p.m. A full schedule – which includes the likes of “Amadeus,” “Moulin Rouge” and “The Jungle Book” – can be found at cityofchicago.org.

The new venue, which also offers drinks and food from Goose Island at a nearby stand, really is worth a visit. But, just in case, you might want to bring a book to read while you wait for the screen to warm up.