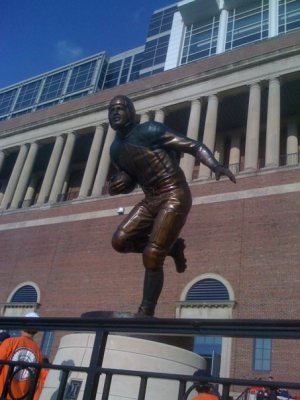 There are shapes now moving,
Two Ghosts that drift and glide,
And which of them to tackle
Each rival must decide.
They shift with spectral swiftness
Across the swarded range,
And one of them’s a shadow,
And one of them is Grange

(CBS) The Ghost hasn’t galloped in Champaign since 1925.

But come August, Red Grange will be back. In spirit, at least.

But also in character. And just for one night.

On Friday, Aug. 23, downtown Champaign’s most historic stage venue will play host to a one-act play entitled, “Red Grange: The Galloping Ghost returns to the Virginia Theatre,” put on in conjunction with the Champaign Park District and the University of Illinois. Tickets go on sale on Friday, with all proceeds from the show benefiting the future upkeep and preservation of the 92-year-old Virginia Theatre, which recently underwent a $7 million restoration to return it to its original glory.

For 80-year-old Grange historian Charlie Finn who wrote the play, the show is a culmination of a lifelong fascination with the athlete who was voted the Big Ten’s greatest icon by the BTN in 2010 and more than a decade of research.

Finn, of Champaign, said that the play will not only focus on the life, times and triumphs of the Illini and Chicago Bears football legend, but also will transport the audience back to the Roaring ’20s with an array of Vaudeville acts, Wurlitzer organ music and an ice cream social set up outside the theater.