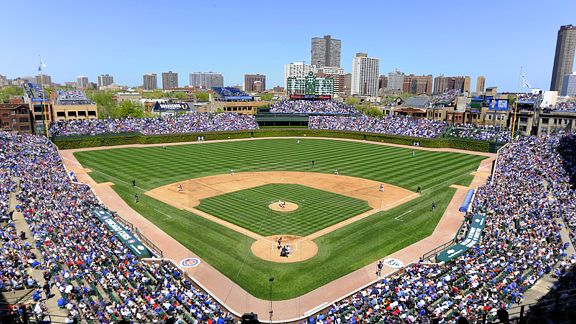 For the past eight years, I’ve lived just six blocks from Wrigley Field. Considering that proximity, I can’t recall the last time that I’ve waited until mid-May to attend my first Chicago Cubs game of the season.

But such has been the drought level of my interest this year.

As a result, today – my 37th birthday – will be my first time walking through the turnstiles of the Friendly Confines in 2013. As an (almost) annual tradition, I try to attend a Cubs game to celebrate each birthday.

Clearly, I’m not dead-set ion having “happy” ones.

But much to my surprise, the Cubs have actually crept onto my good side as the game approaches. However, as for Chicago as whole, baseball has its weakest springtime pulse in decades – on both sides of town.

I figured I’d check it today, and weigh in with my thoughts about the sub.-500 state of both the Cubs and the White Sox as summer in the city starts to roll around.

With all of the Cubs owner’s proposed ballpark and neighborhood renovations – from a hotel at Clark and Addison to a new plaza, entrance and Jumbotron at the stadium – Wrigleyville appears to be on its way to becoming “Rickettsville.”

Now, whether that’s a good thing or not is debatable. But what isn’t is the fact that all we’ve heard for months is what’s happening with the Cubs off the field. This week, pleasantly enough, we saw some things actually happening on it.

Against Washington and Colorado, the Cubs won back-to-back series against teams with winning records – no small feat. Their starting pitching has continued to be solid. Kevin Gregg’s presence has stabilized the back end of the bullpen, remarkably enough. And the Cubs now have two young cornerstones locked up in Starlin Castro and Anthony Rizzo, whose comfort levels and batting averages should continue to rise with the temperatures.

I still have serious questions about the depth of the Cubs’ pitching for the long-term. Gregg is a stopgap, not a solution. Edwin Jackson looks like an albatross. And the minor leagues are still bereft of clear-cut front-line starters or relievers.

The hope here is that the Cubs select a stud pitcher at No. 2 in next month’s draft – and that he pans out. I’d love to see a trade for Tampa Bay ace David Price. And hopefully, top prospects Jorge Soler, Alberto Almora and Javier Baez really are what they’re cracked up to be.

Make no mistake, the tunnel is still a long, dark one for the Cubs. But right now at least, you can see a pinprick of light at the end of it.

The mood on the South Side, meanwhile, seems to be as dark as the White Sox’s caps.
When the Cubs moved ahead of the Sox in wins last weekend, my friend Jeremy Werner of ESPN Radio 93.5 FM in Champaign told me on Twitter, “It’s why I maintain the Cubs are closer to a World Series than the Sox. The Cubs at least have hope (prospects).”

The Sox, meanwhile, have a bloated $124 million payroll – the ninth highest in baseball – that as of earlier this week was producing a major league-worst on-base percentage of .279.

On Wednesday, Matt Spiegel of 670 The Score argued in a column at CBSChicago.com that the Sox will get healthier and rediscover both their defensive prowess and power at U.S. Cellular as summer wears on. They’d better hope so. Because if not, that’s just what the summer will do.