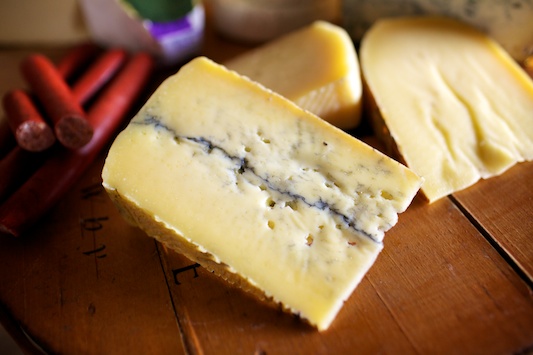 In Chicago, the cheese stands alone.

No, really. It actually does.

You can find it by itself inside an unassuming brick warehouse on a nondescript street across from a lonely field in the industrialized South Side neighborhood Back of the Yards, which once served as Chicago’s meat-packing district and looks like it still could.

So alone is the cheese, in fact, that I actually drove past it – twice – while seeking it out last weekend. But once I did find it, I also discovered something else. The cheese doesn’t simply stand alone.

It also stands out.

And with no exterior signage, it’s also just hard to find.

Devised as the brainchild of Chicago fromagier Giles Schnierle, the Great American Cheese Collection Warehouse first opened in the late 1980s with the intent of supporting local restaurants – and local cheese lovers. Today, it represents more than 65 small North American cheese producers and boasts one of nation’s largest menu of cheeses with more than 300 farmstead and artisan-made varieties that are sold mainly to restaurants and specialty shops.

But it does sell its cheese to the public, as well. Until last fall, the Warehouse’s Cheese Market opened its doors to buyers every Saturday morning. But in September, Schnierle decided to make his collection more convenient – yet more elusive – by moving it online and ending the weekly market.

Today, he offers more than 40 of the warehouse’s cheeses for sale through Artizone.com, a web-based grocery service. The online collection is constantly rotating and cheeses are delivered by truck to buyers within 24 to 48 hours of ordering.

On select Saturday mornings, however, the Great American Cheese Collection Warehouse does still welcome the public inside to inhale its powerful aromas and sample its unique tastes. Last Saturday was one such day during which the Warehouse hosted its pre-Valentine’s Day “CheeseMarket Plus” from 11 a.m. to 3 p.m.

Lured by the novelty of the Warehouse, I headed off to the part of the city that once gave Chicago the nickname “hog butcher to the world” in order to pig out on cheese. Once I finally found the place, I walked through its street-side truck delivery dock and opened a door clearly labeled “CHEESE MARKET.”

What I discovered inside was unexpected. I had assumed that a “warehouse” would be a sprawling room filled with aisles and racks of cheese. But instead, what I found was a small rectangular room filled with folding tables and vendors of all sorts (including those hawking knives, teas and pies). Also milling about the chilly, aromatic space were a few dozen cheese buffs grazing. To fit in alongside them, I immediately began tasting – and then tasting some more.

I ended up sampling everything from cheese breadsticks to chocolate goat cheese blends to traditional cheddars and goudas. My favorite slice was a mellow, double cream “Sangamon” cheese from Ludwig Farmstead Creamery in Fithian. I purchased a half-pound of it and Ludwig’s “Vermilion River Blue” cheese to take back home.

After all, I could hardly leave alone.