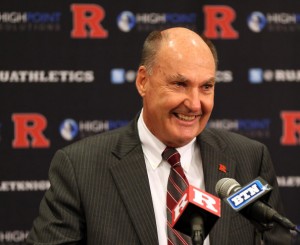 So, is it time for its regular season to grow, too?

On Monday, Big Ten coaches and athletic directors met in Chicago to discuss the latest twists and turns of the conference. Afterward, commissioner Jim Delany indicated to reporters that the league has decided on a new twist: It won’t be sticking with the status quo of eight Big Ten football games much longer.

“The thinking is we like to play each other, and those are not hollow words,” Delany told the Chicago Tribune. “We are getting larger, and we want to bind the conference together.”

Reportedly, the Big Ten – which will grow to 14 members with the addition of Rutgers and Maryland in 2014 – is debating only whether to bind together further by increasing its annual slate of league games to nine or 10. A decision is expected this spring.

Now, the move to nine conference games isn’t a complicated choice. After all, the Pac-12 and Big 12 already play that many, and the Big Ten has previously discussed doing it.