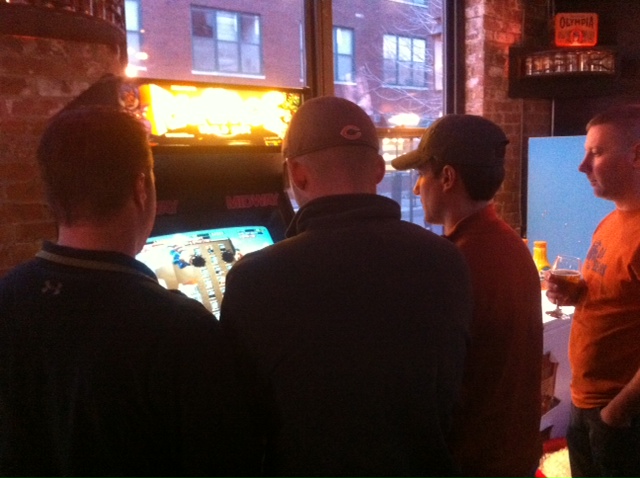 My Wisch List newspaper column from the Saturday, Nov. 24, editions of The Daily Journal (Kankakee, Ill.) and The Times (Ottawa, Ill.) …

I don’t own a DeLorean. I have no idea how to make a Flux Capacitor. And I can’t say that I’ve ever met Marty McFly or Doc Brown.

But I did go back to the future this past week.

Last weekend, my fiancée and I swung by Headquarters Beercade, a new hotspot in Chicago’s Lakeview neighborhood where a mural on the back wall reads “Don’t grow up, it’s a trap.” More than any place that I’ve ever visited in the Windy City, Headquarters does all it can to ensure that you don’t have to grow up.

For those of us with fond memories of cashing in our allowance for a fistful of quarters and then spending every dime on games at the local arcade, Headquarters, a bar and vintage video game arcade – yes, you read that right – takes you back to those days. It’s a great concept and a wonderful jaunt back to the 1980s for everyone, even if you don’t remember the ’80s.

The brainchild of Chicago nightlife entrepreneurs Mark Kwiatkowski and Brian Galati, Headquarters opened on Oct. 11 at 950 W. Wolfram St., and since then has seen a steady stream of old-school gamers and new-school craft beer aficionados step inside.

In regards to the games, the place has just about everything your 12-year-old self could want, from Pac-Man, Ms. Pac-Man, Frogger, Donkey Kong, Galaga, Asteroids and Dig-Dug to Double Dragon, Teenage Mutant Ninja Turtles, Street Fighter II, NBA Jam and Mortal Kombat. There are even more, with nearly 40 games offered in sum.

On top of the games, Headquarters offers an impressive beer list that rotates out every 10 days and specializes in lesser-known brews such as Stillwater Kopstootje ale and Dark Horse raspberry ale. The drink menu also offers offbeat hand-crafted cocktails with ‘80s-themed names such as the “Don Johnson” and “Who Got The Mott’s?,” which you can sip while watching sporting events or old 1980s TV episodes such as “American Gladiators,” “Double Dare” and “Pac-Man: The Animated Series.”

During our visit to Headquarters, my fiancée Debbie and I surveyed the kitschy scene with a laugh and then surveydd Headquarters’ beer list. She ordered a Brooklyn Monster, good for blasting digital monsters, I figured. Meanwhile, I ordered a Brickstone APA from the eponymous Bourbonnais brewery, which hearkened me back the video-game roots I sprouted in my hometown.

We then hit the games. I most enjoyed taking new cracks at my old standards Double Dragon and T.M.N.T. Debbie, meanwhile, tackled her childhood favorite, Pac-Man, and surprised – and impressed – me by shattering the game’s high score.

Best of all, after unknowingly pumping a few dollars worth of quarters into the machines, we learned from the bartender that the games are actually free to play. Initially, the bar was planning on doing that as a grand opening promotion, but has since decided to keep the games free indefinitely.

Considering that arcade games were designed to gobble up your quarters like Pac-Man gobbles ghosts, that’s a huge plus when visiting Headquarters. After all, it give you more cash to spend while sampling the bar’s array of tasty brews.

“This is a concept that, from start to finish, I’m extremely proud of,” Galati told CBSChicago.com’s Sam Zuba last month. “We took a lot of out-of-the-box ideas and used them. It’s just a collection of a well-rounded and very creative concept. You’re always being entertained.

“At the end of it, we want to make sure – and we take pride in the fact – that every customer is taken care of.”

I can safely say that my youth was taken care of too.