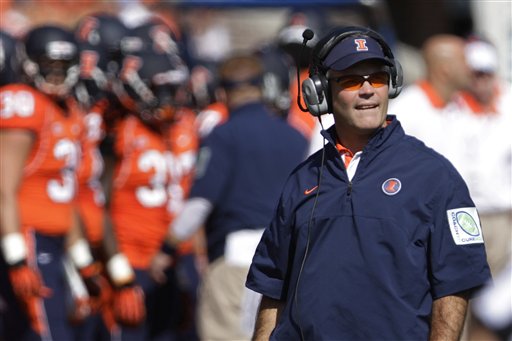 (CBS) Down in Champaign, where these days things are far more blue than orange, the Fighting Illini football team is a woeful 2-5 in head coach Tim Beckman’s first season.

Meanwhile, 335 miles away in northwestern Ohio, the Toledo Rockets are flying high at 6-1 in their first season without Tim Beckman as head coach.

So, is that stark disparity of records a sign of brighter days to come for Beckman by showing that, in time, he can build program so strong that it runs smoothly even without him? Or is it instead a frightening warning flare signaling that Illinois AD Mike Thomas hired the wrong guy?

This past weekend, after Illinois and Beckman were humiliated – yet again – in a 45-0 skunking in the rain at Michigan, a commenter at IlliniHQ.com by the moniker “Chitown” wrote about Illinois, “We hired the wrong coach. Just like Colorado did with Dan Hawkins, we did with Beckman. The real coach of Boise State is still the current coach of Boise State [Chris Petersen].

“Colorado got scammed with Dan Hawkins. The REAL coach of Toledo was the offensive coordinator last season and he’s now the current head coach. We got the current Dan Hawkins, aka Tim Beckman. … We are the Colorado Buffs from 3-4 seasons ago. Admit the mistake. Tim Beckman was NOT the reason the Rockets were successful. The current head coach of Toledo, former O coordinator, is the reason Beckman got the Illinois job.”