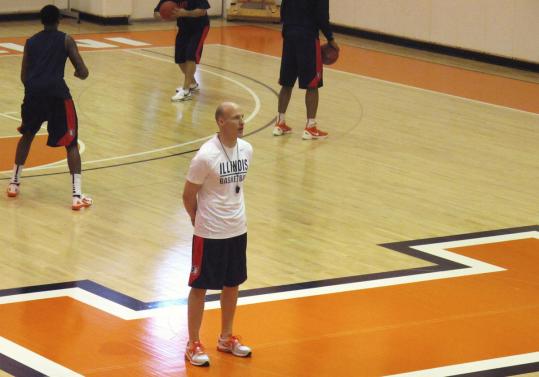 (CBS) From Kansas’ Naismith tradition to North Carolina’s Jordanesque pedigree to Duke’s Coach K-fueled dominance, every “basketball” school in the country has something special to sell.

But none of them offer the same opportunity that Illinois does.

“They put forward something that was pretty much legendary, I would say,” Melvin Nunn told Scout.com last week when discussing the presentation that first-year Illini coach John Groce & Co. staged for his son, Kendrick, during their visit to the Chicago Simeon standout’s home.

“It was straight-forward on him being that in-state guy coming to the state school and being not just a basketball player, but someone who leaves a legacy at his state school,” Melvin Nunn continued about the Illini pitch. “It was based on alumni, based on him winning state titles as a high school player, and then continuing that at his home-state school, and starting to get Illinois back rolling like they were in the early 2000s.”

Yes, the opportunity that Illinois has to sell is about all of those things. But it’s about even more than that, too. Because, the Fighting Illini truly do offer something that no other school in the country can. And that’s the chance to finally bring a national title to the best basketball program in the nation to never have won one.

Save me your Purdues, your St. John’s and your Temples, Illinois is hands-down the prettiest of the NCAA’s championship bridesmaids that find themselves perennially standing beside the altar looking up at the likes of Kentucky’s and UCLA’s beaming, ring-laden brides.