My Sept. 15 Wisch List column from The Daily Journal (Kankakee, Ill.) and The Times (Ottawa, Ill.) … 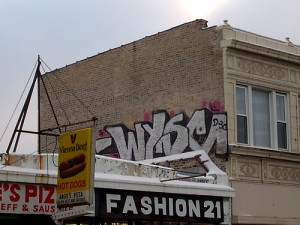 Or, at least, it long has been. Far more so than New York City, where garbage bags pile up along the alley-less streets, and Los Angeles, where graffiti seems nearly as prevalent as the palm trees.

However, when it comes to the amount of graffiti in Chicago, the city’s reputation of cleanliness – one I’ve long heard compliments about from visitors and taken great pride in – is becoming sullied.

In late August, the Sun-Times reported how budget cuts at Chicago’s City Hall have hit the graffiti-removal program hard, eliminating nearly one third of the workers tasked with canvassing the city to clean public and private property that’s been spray painted by gang-bangers and taggers marking their turf.

As a result, graffiti is spoiling the city’s streetscapes for far longer than ever before.
“It’s absolutely horrible,” said business owner Arnie Wulfstat, who told the Sun-Times on Aug. 23 that he’d been waiting nearly two weeks for the city to remove the graffiti painted on the side of his building at 1259 N. Milwaukee.

“I’ve called the city,” Wulfstat added. “They used to come out within a week. Instead of cutting back, they should add to it.”

Say what you will about Richard M. Daley’s leadership, but the former mayor’s “graffiti blasters” program – one of his pet projects designed to beautify Chicago by providing free graffiti removal – was a boon to the city’s image, both for residents and tourists. It worked quickly and it worked well.

However, with new mayor Rahm Emanuel facing a $600 million deficit, he has slashed the “graffiti blasters” program’s budget by 25 percent, down to $4.1 million, and cut its workforce from 72 employees down to 49.

Perhaps most significantly, the program no longer works on a first-come, first-served basis. According to city officials, the blasters now target four of Chicago’s 50 wards each day – but, oddly, only four days a week during the summer when taggers surely are most active.

This means that some neighborhoods now wait as long as three weeks for the city to cover up graffiti with brown paint or blast it off walls with a pressure wash of baking soda.
In defense of the changes, Emanuel said, “When we did graffiti [removal] the old way, we’d go into a neighborhood, do one wall, walk away and the rest of the neighborhood would still have graffiti.

“Now, it’s the entire community and any community that’s had it since we did the blitz changes it … So, while you’re calling it lag time, I see an entire neighborhood clean – not just one wall in a neighborhood. It’s a different strategy.”

Yes, but from my vantage point, it’s not a better one. For example, while riding the Brown Line from Lakeview to the West Loop on Thursday, I saw dozens of instances of graffiti, many of them enormous in scale. The amount – and boldness – of the eyesores along that route and others has only seemed to increase throughout the summer. It didn’t at all used to be that way.

Last month, Ald. Robert Fioretti said, “Graffiti is not being removed in parts of our city. These four-day hits and going ward by ward are ineffective … It sends a message that we may be losing the battle to the gang war out there. All graffiti has to come down. At least under the other [Daley] administration, it was down in three days.”

I understand Chicago needs to make budget cuts, but they shouldn’t also allow graffiti to grow. So, it’s on the mayor to address the tagging.