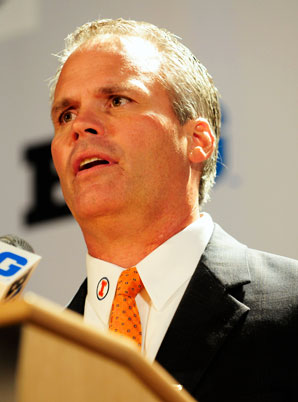 (CBS) On Tuesday, I wrote that the ineligibility of Penn State and Ohio State for this season’s Big Ten Championship Game opened a door in the Leaders Division for new Illinois football coach Tim Beckman.

On Wednesday, however, he walked through a different one. And it wasn’t the door I was hoping that Beckman would choose.

At Big Ten Media Days this week, much discussion swirled around the controversial topic of recruiting current Penn State players, who were who were essentially declared “free agents” by NCAA president Mark Emmert as part of PSU’s sweeping sanctions.

And Beckman found himself as the focal point of that controversy when it was revealed that on Wednesday he sent an armada of eight Illini coaches to State College to supposedly chat up just two Nittany Lions who had expressed interest in transferring to Champaign.

So, was eight enough?

Well, by my count, it was far too many.