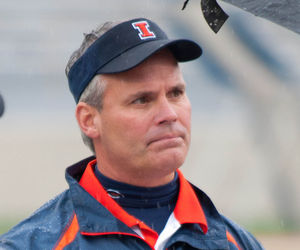 (CBS) With an empty resume, the jury is still out for Tim Beckman.

But thanks to the foibles and failures of two of his conference rivals, Illinois’ first-year football coach could have a big “in” for 2012.

And, perhaps, well beyond.

The Fighting Illini, of course, compete in the Big Ten’s woefully misnamed “Leaders” division, which includes the likes of Ohio State and Penn State, neither of which are eligible for this December’s conference championship game due to NCAA sanctions.

That bad news for the Buckeyes and Nittany Lions fans, however, brings good tidings next month to the training camps at Illinois, Wisconsin and Purdue. I’d include Indiana on that list too, but until further notice, the Hoosiers are, you know, still the Hoosiers – and not championship material.