Today’s column from the Kankakee Daily Journal and The (Ottawa, Ill.) Times …

So, does the Eye have it?

There’s a lot to see in Chicago during the summertime.

But outside of, say, the monkey house at Lincoln Park Zoo, most of it doesn’t stare back at you.

This summer, though, on the corner of State and Van Buren streets in the Loop, that’s all that Chicago’s latest, ahem, eye-catching attraction does.

And then it stares some more.

In case you haven’t had your ears on and missed the word of mouth, one month ago today, the Eye – a massive three-story fiberglass eyeball – was officially unveiled on a patch of grass in Chicago’s Pritzker Park.

Designed by Oak Park artist Tony Tasset, who modeled the Eye after his own, the sculpture was lauded last month by Ty Tabing, executive director of the Chicago Loop Alliance, as a creation that could generate the same kind of buzz evoked by 1999’s famous “Cows on Parade” or Millennium Park’s wildly popular “Cloud Gate,” better known, of course, as “The Bean.”

As a guy who revels in exploring Chicago’s quirks and curiosities, last weekend I journeyed to the Loop to visit this oddball eyeball and investigate whether the Eye indeed does have it.

Standing 30 feet tall and consisting of nearly 9,000 pounds of fiberglass wrapped around another 9,000 pounds of steel, the Eye was constructed this summer by Tasset and his team in Sparta, Wis., home of Fast Corp. (Fiberglass Animals Shapes and Trademarks).

After assembling, sanding and buffing the enormous sculpture into a perfect sphere and painting on a couple hundred red veins and the detailed blue iris, it was then cut into 17 pieces and transported 256 miles down the Eye way to Pritzker Park.

“We wanted to have someone do something that we CLA sponsored the project. “[Tasset’s] art is not too highbrow and still very provocative and thought-provoking at the same time.”

There’s no doubt that the Eye provokes something. But exactly what depends on, well, the eye of the beholder.

When the sculpture debuted, WGN Radio’s John Williams, for example, debated on the air with listeners whether it was “Art or Crap” (I don’t know which camp prevailed). And last weekend in Pritzker Park, Beverly Pletsch, of Berwyn, asked skeptically, “Did we pay for this?” as she stood studying the Eye beside her daughter and three grandkids. “It seems a little extravagant for these times we’re living in.”

According to Tabing, the project cost “a little over the six-figures mark,” and was funded through special services taxes paid by Loop businesses, as well as corporate sponsorships. There’s no doubt that the Eye is over-the-top, but for many tourists roaming the Loop last weekend, cameras in tow, it was also enormously appealing.

This was especially true among the short set, as kids flocked to the Eye (Pletsch’s 8-year-old grandson, Frankie, for example, loved it). And, in fact, what I found to be the most entertaining aspect of the sculpture wasn’t the Eye itself, but the reactions that children had to it.

“How does it not roll away?” one little girl asked her mother moments before a boy climbed up and kissed the underside of the Eye as his parents snapped a photo. Later on, another youngster ordered his sister to stand still so he could stare into her eye “and see if it looks like this.”

“OK,” he decided after several seconds of eyeballing her. “It kinda does.”

Come Halloween, the Eye closes. Don’t trick yourself into thinking it’s worth a trip to Chicago on its own. But, if you find yourself already in the city, it is a treat for kids. 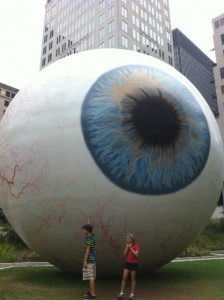