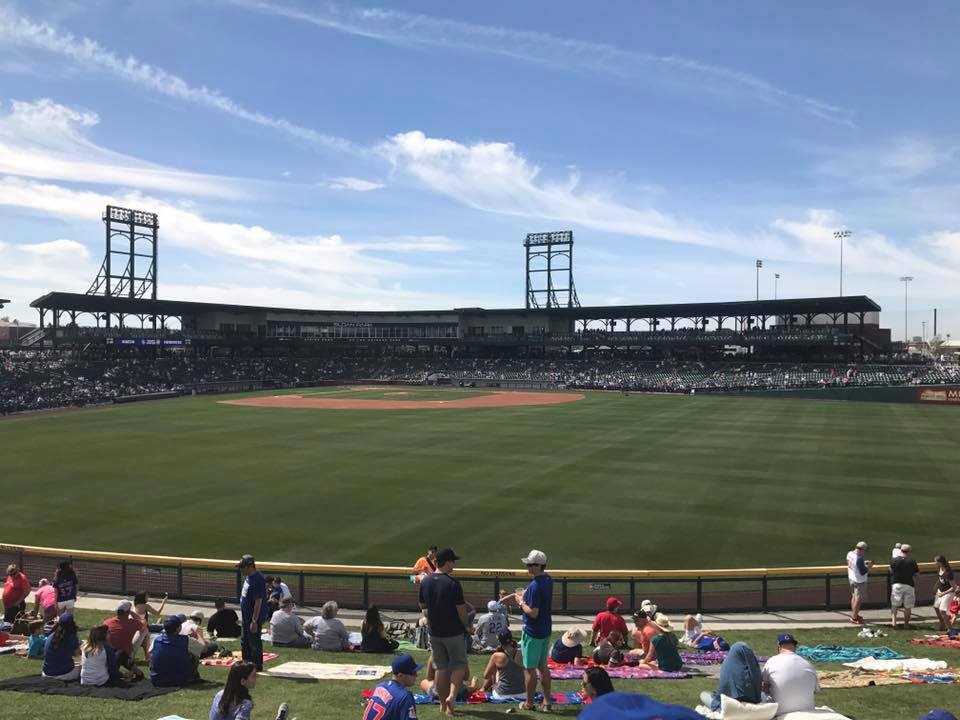 From the Saturday, March 11, editions of The Daily Journal (Kankakee, Ill.) and The Times (Ottawa, Ill.) …

But when you’re sitting in the sunshine at the Spring Training Home of the Cubs watching baseball with a cold beer in hand, it feels like you’re just a few feet from summertime in Chicago.

And that feels awfully good.

Last weekend, my wife and I joined a few friends for a pair of spring training games at Sloan Park and we came away very impressed with the facility opened in 2014 – and not just because the ballpark’s scoreboard informed us game time on Saturday that the temperature was 78 vs. 37 in the Windy City.

Bordered by streets named Waveland and Sheffield, and with Chicago Dogs for sale in the grandstands with Hot Doug’s available in the outfield, Sloan Park delivers many a subtle nod to Wrigley. But it also has its own distinct flavor, and is considerably more family-friendly than the Cubs’ baseball cathedral back home at Clark and Addison.

The spacious lawn spanning the outfield at Sloan provides a great place for families to spread out, while the play area directly behind features a bounce house and a miniature wiffle ball field that allow kids to romp within shouting distance of their parents. For adults, food trucks serving fare from local Arizona vendors, wide concourses offering great vantage points of the field from every angle, and a large covered beer garden beyond right field are all great treats.

Heck, spring training itself is a treat. And it’s the perfect prescription for the winter blues, whether you’re a Cubs fan, Sox fan, Cardinals fan or otherwise.

One pleasant surprise at Sloan Park took place on Saturday when the beer garden bartenders stopped serving drinks, shouted “National Anthem!” and stood at attention as the “Star-Spangled Banner” was sung.

In a sports climate stoked with controversy last year by former San Francisco 49ers quarterback Colin Kaepernick’s refusal to stand for the national anthem, it was refreshing to see patriotism – and respect – on such prominent display at Sloan Park.

Against the Dodgers last Saturday, I saw reigning National League MVP Kris Bryant blast his first home run of the spring – a grand slam, no less.

But he wasn’t even the player I was most impressed with during my two-day stint watching the Cubs. Rather, the most attention-grabbing performances came via prospects Eloy Jimenez and Jeimer Candelario.

Only 20 years old, the 6-foot-4, 205-pound Jimenez blasted an eighth-inning home run on Friday vs. the Reds, showing why he is the Cubs’ top-ranked prospect. On Saturday, the 23-year-old Candelario rapped out a single, double and triple, looking like a guy who could potentially swipe the team’s final roster spot from Tommy LaStella or Matt Szczur.

Whether outfielder Jimenez or infielder Candelario make the bigs this season or not, the Cubs’ minor-league cupboard is far from bare in regards to position players.

While position players may remain a strength for the Cubs’ farm system, pitching does remain a question mark for the franchise going forward. There remains a dearth of young impact arms in Cubs camp, and that could be an issue this season if the team’s starters suffer any injuries after a remarkably healthy 2016.

In that regard, prospects such as Jimenez and Candelario could end up being most valuable as potential trading chips.

Grin and Wear It

An underrated highlight of spring training are the T-shirts.

My favorites were worn by a Cincinnati fan, whose shirt read “I’m with Pete … Give me $200 on the Reds,” and another donned by a Cubs fan.
Its message: “Live Life like you’re down 3-1.”