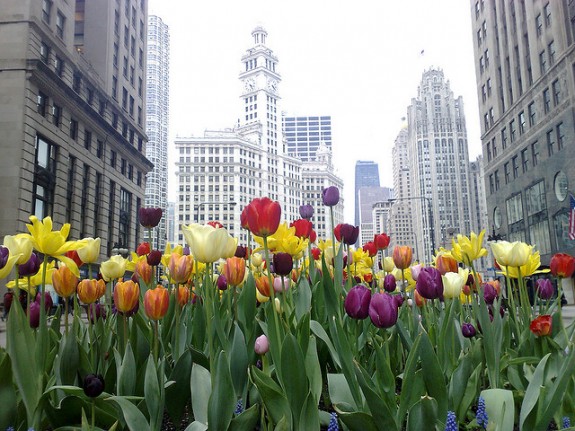 From the Saturday, March 29, editions of The Daily Journal (Kankakee, Ill.) and The Times (Ottawa, Ill.) …

They say that April showers bring May flowers.

But apparently March blizzards do too.

Or at least that’s the case this year in Chicago, as through April 6, Macy’s in the Loop (111 N. State Street) has transformed its 9th Floor into a wonderland called “The Secret Garden” that’s bursting with an estimated 2 million flowers and exotic topiaries.

In addition to the flora, the “The Secret Garden” also offers guided tours and features a variety of cooking demonstrations, seminars by floral experts, and fashion events to put you in the proper mood for springtime.

If you’re looking to just enjoy some laughs, or want to produce a few yourself through improv workshops and open stage events, visit chicagoimprovfestival.org to learn more about times and venue locations.

Robots at the Museum
April 5-13

If you didn’t know that there’s a National Robotics Week, well, now you do. Taking place from April 5-13, the mechanized occasion will be celebrated at the Museum of Science & Industry (5700 S. Lake Shore Drive) during its weeklong “Robot Block Party.”

The event will include demonstrations of a variety of types of robots from the U.S. and around the world, lectures from some the nation’s top university robotics scholars, special workshops and other hands-on activities. For more information, visit msichicago.org.

Whether you have a kid or a canine – or both – you can indulge their sweet tooth during fun-filled Easter events in Chicago.

At 9 a.m. on April 12, Soldier Field is hosting the free “Spring Egg-Stravaganza,” during which kids can scramble across the Chicago Bears’ hallowed turf during what’s called the biggest candy grab in the city. For more information, visit soldierfield.net.

Also on April 12, the “Doggie Egg Hunt” will be held from 10 a.m. to noon at Horner Park on Chicago’s Northwest Side (27141 W. Montrose Ave.). For a $10 fee, dogs will hunt for treat-filled eggs, receive a bandana and take part in the “Bonnet Parade.” Dogs must remain leashed and with their owners at all times. For details, visit chicagoparkdistrict.com.

On April 19, families can take part in yet another “Egg-Stravaganza,” this one at Lincoln Park Zoo. Held from 8:30 a.m. to 10 a.m., the event includes treats with the Easter Bunny, an egg hunt, craft-making activities and visits with zoo animals. For ticket prices and details, visit lpzoo.org.

Before you get your beach body in shape for the summer, consider gorging once more during Baconfest Chicago 2014, an event held at the UIC Forum (725 W. Roosevelt Road) that’s described as the city’s “festival dedicated to America’s favorite cured meat: bacon.”

During the fest, some of Chicago’s finest chefs will conjure up a variety of bacon dishes, served along with cocktails, beer and wines designed to complement the meal. For more information about sessions and tickets, visit baconfestchicago.com.

With series of tastings, dinners and seminars throughout the city and suburbs, Pinot Days culminates on April 26 with a Grand Festival at Navy Pier featuring a tasting of 150 wines. For details, visit pinotdays.com.