From the Saturday, May 26, editions of The Daily Journal (Kankakee, Ill.) and The Times (Ottawa, Ill.) … 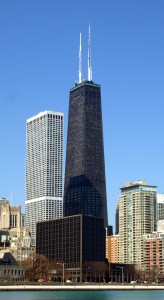 The calendar tells us that spring is right around the corner.

Although, I lost my calendar somewhere in a snow drift about two months ago.

Nevertheless, I’m certain that the season is coming (and staying) at some point, even if that isn’t just yet. In the interim, I thought it might be nice to think about what will be coming to Chicago along with springtime – just as long as their progress doesn’t get stuck in any snowdrifts.

Since opening in 1969, the 94th-floor observation deck of the John Hancock Building has offered Chicago’s most breathtaking views – yes, even better than Willis Tower’s. But now, after 45 years, that lofty lookout is getting a fresh identity.

Beginning in March, the John Hancock Observatory will be rebranded as 360 Chicago and feature the tagline “Best Views. All Around.” Later this spring, the tourist hotspot will then undergo a full renovation featuring an updated look that’s described in a press release as “rich in blues and greens, meant to celebrate the natural land, sky and water elements seen from the observatory.”

The new name and color schemes also aren’t the only things coming to Hancock’s 94th floor. Last month, the observatory’s owner, Paris-based Montaparnasse Group 56, announced that it is planning an even more extreme version of Willis Tower’s Ledge.

Called “The Tilt,” this glass box will protrude from John Hancock’s observation deck and then tip toward the street far below, offering strapped-in customers an experience that can truly take your breath away.

With our smartphones, tablets and WiFi, we live in a connected world – or, at least, we do as long as we’re not underground inside a CTA train tunnel.

On Monday, however, the Chicago Transit Authority announced that it will accept bids through mid-March for companies to upgrade its current wireless network inside the 24 miles of Red and Blue Line subway tunnels. The goal is to transform it from terribly spotty to a 4G system that actually suited for the Social Media age.

In England and Australia, both of which I’ve visited during the past two years, alcoholic cider is big. And I suspect that it’s going to be the next big thing for bars in America, as well.

In March, Northman, located at 4337 N. Lincoln Ave. in Ravenswood, will get the apples rolling when it opens its doors as Chicago’s first pub specializing in cider. Ironically, the bar will be located just up the street from a popular restaurant called Bad Apple.

While Northman will also offer patrons beer and wine, its focus will be cider, of which more than 100 varieties will be available on draft and in casks or bottles. Celebrated Chicago chef Cleetus Friedman, who’s a partner in the project, said on Twitter about those questioning the mass appeal of cider, “if craft beer focus can sustain many places, we believe craft cider can, too. Looking forward to showing everyone!”

Last month, Timeout Chicago wrote that cider is rapidly growing in popularity both locally and nationally with an increasing number of styles appearing with greater frequency on Chicago restaurant and bar menus.

On Feb. 8, the city actually hosted its second annual Cider Summit at Navy Pier, and Midwest cider producers such as Virtue Cider and Vander Mill in Michigan, and Prima Cider in Long Grove are eager to carve out a niche from Chicago’s crowded beer community.

And I can tell you, if our drinking cousins in the UK and Australia, are any indication, don’t be surprised at all if they do.