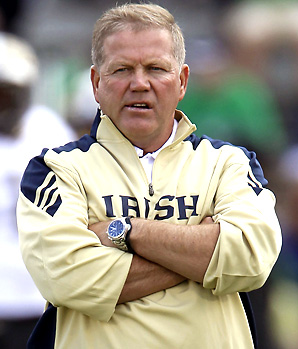 (CBS) For Notre Dame, ranked No. 1 in the land with a single regular-season game remaining, the door to the national championship is wide open. But the door to the Big Ten? Well, that’s almost closed.

Back in September, when the Fighting Irish announced that they were kinda, sorta joining the ACC by agreeing to play a semi-league schedule in football and a full slate of games for its other sports, I shared my thoughts about a move that was hailed by most analysts across the country as super brilliant and really wise and great and stuff.

“I understand the reasons why Notre Dame is bolting to the ACC – most significantly, its ability to have the cake of conference affiliation, while being able to dine on football independence, too,” I wrote. “Nevertheless, I still think the Big Ten was the best fit for the Irish.

“Because, someday, in an age of superconferences (which most likely is still coming), a situation will arise where Notre Dame is going to have to join a league – all the way. And when that happens, its football program would have been a better fit in the Big Ten than the ACC, which will always be more of a basketball conference than it ever will be a football one. And, as we all know, football is what Notre Dame is really about. Today, tomorrow and forever.”

Well, flash forward two months, and that superconference situation has again arisen – far sooner than anyone imagined. This week, the Big Ten rocked the nation when word leaked that Maryland and Rutgers were bolting the ACC and Big East to become the 13th and 14th members of Jim Delaney’s favorite league.